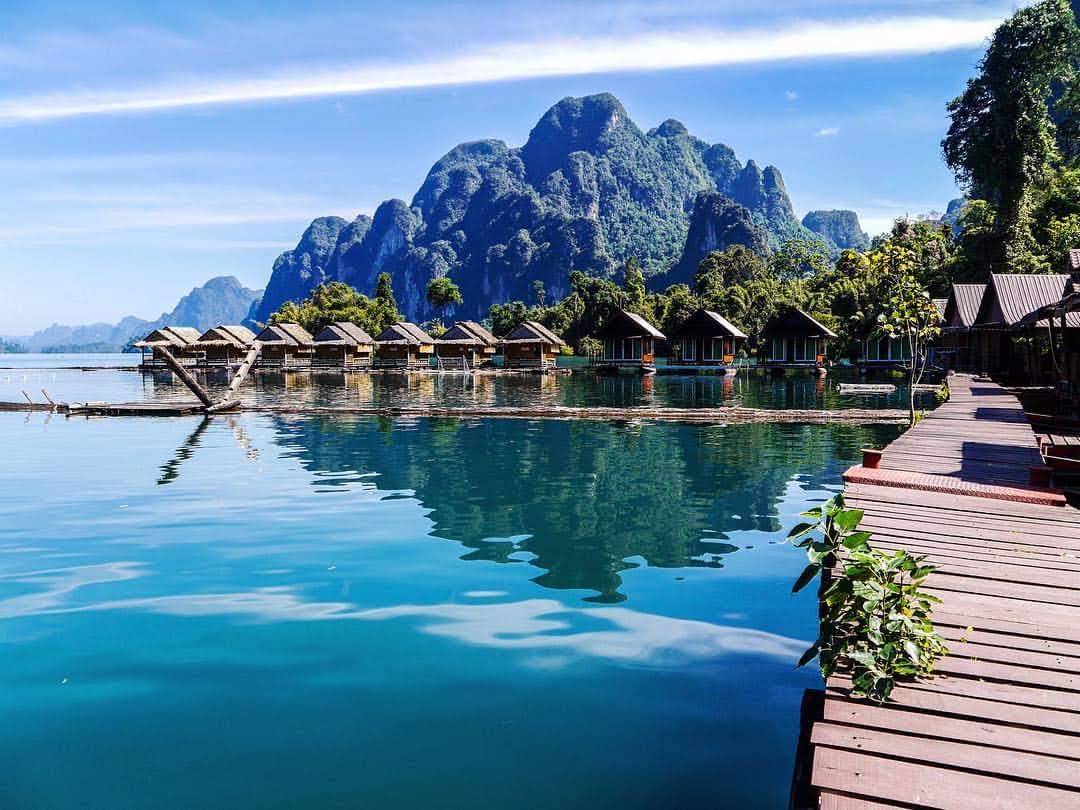 Everybody who starts traveling has heard about the bible of all backpackers and world nomads: “The Lonely Planet” Travel Guide Books. This prestigious travel advisory has voted Khao Sok as one of the best National Parks in the world, in their ranking it reached place 5 in a top 10 list.

We all know that the natural wonders surrounding Khao Lak are the most outstanding features why people flock here; besides the
rainforests there are reefs, beaches, islands, mangroves, mountains, rivers and lakes, etc.

If you draw a 100km wide circle on a map with Khao Lak in the center, you can be sure to have covered nearly all the ecosystems of SouthEast Asia. And Khao Sok tops it all!

This ancient landscape is truly an amazing place, if you haven’t visited this National Park yet make sure you do. The park’s land area is 739 km², and it includes the Chiew Lan reservoir dammed by the Ratchaprapha dam.

and according to Thom Henley, author of the highly informative Waterfall and Gibbon Calls, the Khao Sok rainforest is in fact a remnant of a 160-million-year-old forest ecosystem that is much older and richer than the forests of the Amazon and central African regions.
Here is the eulogy from Lonely Planet about Khao Sok:

“Welcome to Jurassic Park – you can almost hear the theme son playing in surround sound while you venture between the soaring limestone karsts.”

The Khao Sok National Park in Surat Thani has been hailed as one of the eight most beautiful national parks in 2019 around the world by France’s Vogue magazine.

“The jewel of Thailand lies between Phuket and Surat Thani … Spread over 740 km2 and fully covered with lush rainforest, the Khao Sok National Park is a must-see in Asia.” 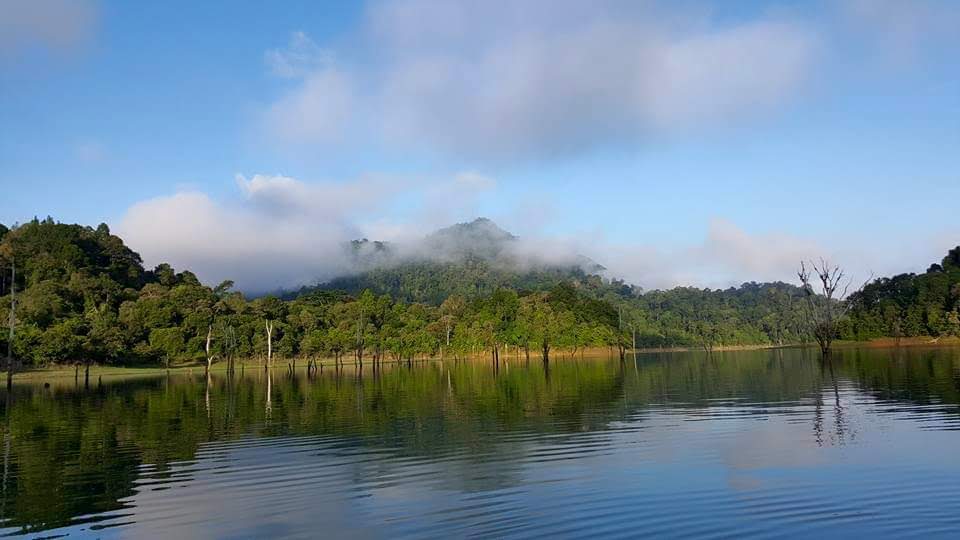 The erosion of the Shan-Thai landmass resulted in the deposition of sediments and pebbles into a large river delta system. Periodically these deposits would slide down the basin edge and into the sea. Over a period of millions of years the sea became shallower and thus warmer and resulted in good conditions for coral and other marine organisms to populate the area.

Limestone (calcium carbonate) deposits began to form as the marine life established a coral reef that is said to have been five times the length and mass of the Great Barrier Reef in Australia, stretching from China to Borneo.

This is the reason Khao Sok and Krabi (Thailand), Guilin (China) and Halong Bay (Vietnam) and Sarawak (Borneo) have such similar topographies. The Karoo Ice Aage was between 350 and 260 million years ago, so as sea levels rose as a result of ice melt, the coral reefs grew, keeping pace with the water surface.

The marine ecosystem was eventually buried under another layer of sediments (the end of the ice age meant increased rainfall and thus increases in erosion/sedimentation). The resulting high pressure from being buried under hundreds of meters of sediments resulted in the formation of the limestone rocks we can still see today.

Magmatic intrusions of granite also formed, the chemical reaction between the molten granite and sedimentary rocks formed deposits of tungsten and tin. The Indian plate started colliding with the Eurasian plate, forming the Himalayas and causing the landmass of Thailand to rotate clockwise and move south east.

The limestone, sandstone and granitic rocks were uplifted, folded and faulted, exposing them to erosion by rain and river waters.

The limestone rocks have been partially eroded, by acidified water (resulting from the rain water flowing through the rainforest leaf litter) leaving the beautiful karst formations we see today. 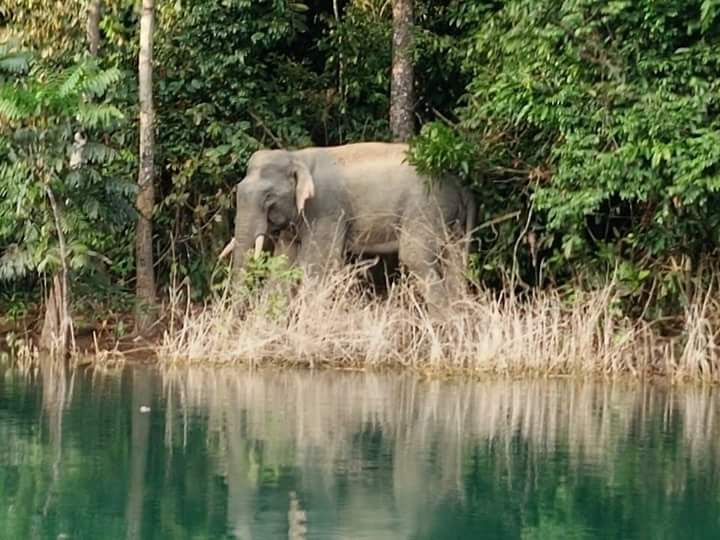 There is evidence of human inhabitation on Borneo between 37000 and 50000 years ago. The last ice age ended about 10 000 years ago, meaning there could have been migrations (by land) from Borneo to Thailand during the period of the ice age. Certainly, the habitat in both locations was similar enough to support these people.

The first accounts of native people living in Khao Sok date back to the reign of King Rama II, when the Burmese attacked south western coastal towns and many local people fled into the jungle for safety. As news spread that the region was rich in animal life, with fertile fluvial soils and good rainfall, more people came to the region.

A deadly epidemic swept through the region killing a large number of the native population, those who survived moved back out of
the area. A village became known as “Ban Sop” – which means “Village of the Dead”, although there is a mountain in the local area known as “Khao Sop” or “Corpse Mountain” which may also be the reason the village was named in this way.

The 401 road was constructed between Phun Pin (Surat Thani) and Takuapa (Phangnga). This opened up the whole area for settlements and plantations, the modern weapons and tools that came with the new peoples meant nature was in trouble.

The logging and mining (tungsten and tin) industry soon followed, to the cost of the rainforest and the Sok river, which began to run brown with sediment runoff as a result of the soil erosion.

Thai students, who had joined in anti military demonstrations in Bangkok fled to Khao Sok after many of them were slaughtered, since this was ideal territory to hide.

Between 1975 and 1982 these students not only kept the Thai Army at bay, but also kept the loggers, miners and hunters out. Had it not been for this seven year occupation, Khao Sok’s forests may well have gone the same way as much of the rest of Thailand’s wilderness – up in smoke.

Also during this period there was considerable interest from the government and the Electricity Generating Authority of Thailand (EGAT), since research had shown Khao Sok to be the largest watershed in southern Thailand.

The National Park Division also carried out some research and established the fact there was still considerable biodiversity worth protecting in the region.

EGAT established the Rajjaprabha Dam – closing off the Pasaeng river and creating a 165 square kilometer lake, inside the National Park Boundaries. This dam was built to guarantee a source of electricity to the south, which by now had become a major holiday destination.

EGAT attempted the largest capture and release operation (to save the animals facing drowning in the lake) ever in Thailand. Unfortunately, this operation was largely unsuccessful and many of the species captured died from the stress. A World Bank study in 1995 revealed the loss of some 52 species of fish from the river, because they were not adapted to the deep waters of the lake.

Do not drop any litter whilst on trails or along Khao Sok’s roads.

Plastic bottles and food bags are a major problem along with cigarette ends and polystyrene packaging.

Take all of your rubbish with you when you leave. Please practice considerate behaviour when walking trails.

There are no toilets in the forest so please bury your waste and burn all tissue. Any sanitary pads or Tampons must be removed from the
park.

Never attempt to catch or chase any wildlife. Firstly these are wild animals and you may get hurt and secondly it creates unnecessary stress for the animals and decreases their energy levels which they need to find food.

When bathing in the rivers or at waterfalls please cover up. Thai culture is extremely different to western culture and it causes offence to swim nude.

Do not venture off of trails and never drive a motorbike or car down along them. The erosion caused by this i is extremely damaging and the noise will scare the surrounding wildlife.