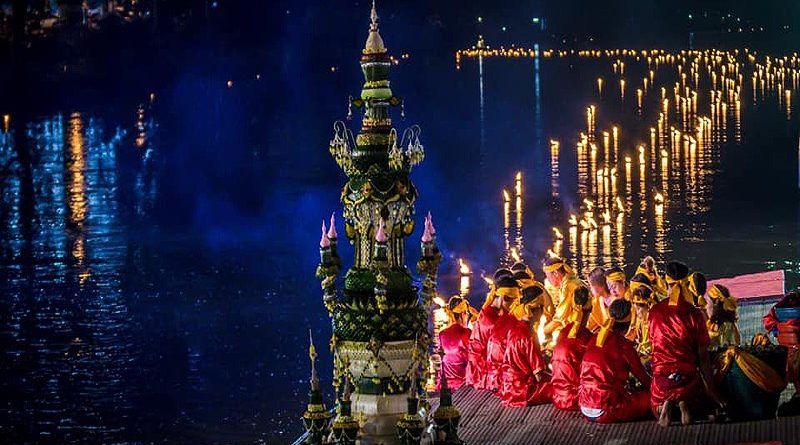 The Loy Krathong Festival is one of the most beautiful and charming and at the same time most popular festivals celebrated in Thailand. 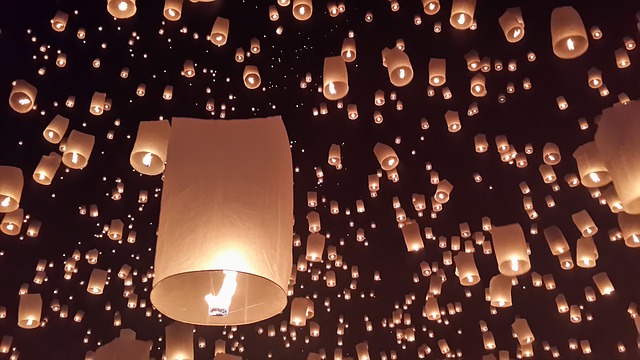 In the full moon night of the 12th Lunar month the rivers and streams throughout the kingdom are magical transformed into amazing light gardens. Once it gets dark, thousands of festively dressed Thais gather on the river banks.

With a slight push lotus-shaped boats of banana and palm leaves, called Krathongs, are set into the water and sent on their journey. They are richly decorated with flowers and filled with incense, candles, coins, thai food and personal gifts (eg, finger nail, hair), that people sent of with the Krathongs. Especially rivers in the cities then offer a charming picture, as thousands of bright boats sail past and plunge the whole scene into a fabulous light.

In its origins, the festival goes back to ancient animist and Hindu beliefs. After the monsoon rains from June to October the rivers are always agitated and threaten with their dirty brown waters the lives and possessions of rice farmers and others. To prevent flooding, but also in gratitude for the rain, which promises a good rice harvest, sacrifices have to be made since ancient times.

Different water spirits, the goddess of water herself Mae Khongkha and the rice goddess Mea Bhosop have to be appeased. At the same time the people ask the gods forgiveness for all the constant pollution and abuse of the waterbodies.

This century-long tradition has developed into the Loy Krathong festival that we know and celebrate today, the Thai festival of lights. Entwined with the emergence of a popular festival like Loy Krathong are colorful myths and legends. Even today it is celebrated by Thais with great enthusiasm.

Couples entrust their Krathongs the most secret desires and swear eternal love. Others consider it more to be a carrier of all their sins, floating down the rivers into the vast ocean. As long as possible the eye follows the dancing lights on the glistening water, for an old Thai proverb says, the longer you can see the candle light, the happier the next year will be.

Some Krathongs survive not for long because little boys are hunting down the coins on them, but nobody seems to be angry about it. For the people it is quite enough that with their donation they have done a good deed, whether for the small spirits of this world or the hereafter, so that according to Buddhist belief this deed will be useful and rewarded in their next life.

Q: What’s the difference between Loy Krathong and Yi Peng?

A: Loy Krathong and Yi Peng are two similar but actually different festivals. First, their most important difference is perhaps where they’re celebrated. Yi Peng is only celebrated in the north of Thailand, and its most elaborate celebrations take place in Chiang Mai. Loy Krathong, however, is observed all over the country. The second difference is the lanterns that are used and how they’re floated. For Loy Krathong, floats made out of banana trees, bread or Styrofoam are set off in water. But for Yi Peng, lanterns are made of bamboo, and fuel cells. They are launched to the sky rather than the water.

Q: How can I get a krathong?

A: It’s easy. You can buy one. You can find them at the street vendors, or if you are a guest of a hotel, it surely can offer you one. Another way to get a krathong is make one yourself. During the festival, most hotels in Thailand offer their guests chances to make krathong themselves.

Q: How do I float a krathong?

A: After you have your own Krathong, head to the water source – most likely rivers, ponds, lakes or even pools! Then light up the candle and incenses, make a wish and let it go!

Q: Do I need tickets for the Yi Peng festival?

A: The festival takes places in various parts of Chiang Mai and is free for all. Traditionally, there are two major lantern releases each year: a paid event in English and the free public event for locals.
The paid event is not run by the government like the rest of the festival and is usually held before or after the actual festival. Tickets cost 100 THB per person, and it takes place outside the city center. The benefit is that there are no crowds and there are explanations of the event in English.