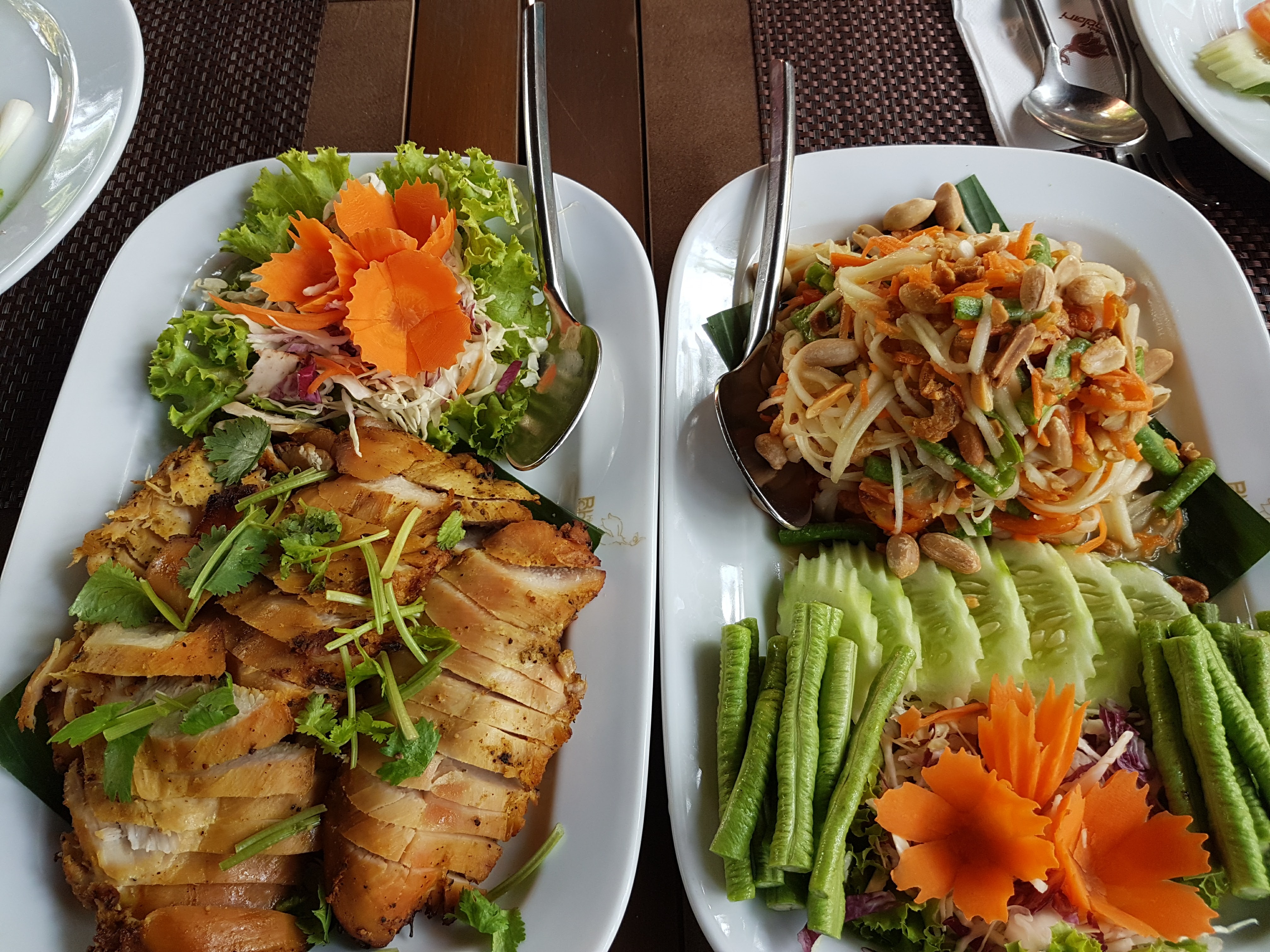 What many people do not know is that Thai food has not always been this way.

Prior to the 16th century the food of the common people and royalty in old Siam consisted primarily of plain rice, fish and fresh vegetables. So what is it that caused such a flavor explosion in Thai food?

Throughout most of Thailand’s history the Thai people had eaten their indigenous fruits and vegetables such as bananas, taro, sugar palm, mango and Thai oranges. There were no domesticated animals up to the 17th century, even though the pig had been domesticated in western Asia sometime around 6000 BC so any meats came from wild animals, fish and shellfish.

These meats were primarily grilled and food was cooked in clay pots. There was no fried or stir fried dishes until the wok was introduced to Thailand from China in the 16th century. Primary dishes included yum (salads) and kruang jim (dips) which can still be seen as a mainstay in Thai cuisine today. Spices were mostly added to food to mask gamy flavors from wild meats or bitterness from some vegetables. In addition, fish was made into nam plaa (fish sauce) and kapi (fish paste) to add flavor to the plain foods.

became the commercial and political center of Asia. At that time it seemed that all roads, both land and water based led to Thailand. Traders and merchants came from all corners of the globe, beginning with nearby China, India and Malaysia, and later expanding to include travelers from Europe who arrived via the sea lanes.

As you can imagine these merchants and travelers brought with them the foods and cooking methods of their homelands, since many foods and spices were alien to Siam at that time. Caravans would set up on the outside of Ayutthaya and sailors would be anchored in the river for months at a time waiting for the winds to turn.

As the merchants and sailors were cooking the foods of their homelands the delicious fragrances would be borne on the winds for all to smell and undoubtedly drew the attention of the Thais. One can imagine them asking about the wonderful smells and tasting new spices, fruits and vegetables from the visiting travelers.

And after tasting these intriguing new dishes they would logically ask about the recipe and ingredients.

Over time these new dishes would become incorporated into the Thai cuisine that we know and love today.

Northern routes brought the Chinese to Thailand and with them came tea, dried fruit, the wok and bamboo steamer, rice noodles and the concept of sweet and sour flavors together.

The Thai’s expanded that even more by including spicy and salty as well to form the current well known Thai dishes. From the west came Indians, and later Europeans, carrying curries, coffee and spices.

Thailand’s nearby southern neighbors contributed betel nuts, satay and massaman while eastern Thailand was influenced by Lao cooking and less so by Vietnamese and Cambodian cooking.

The arrival of the British, French, Dutch and Portuguese in the 17th century created a huge impact on Thai foods.

Europeans brought the onion and shallot to Thailand which are now irreplaceable in Thai cuisine. Merchants also brought garlic, peppercorns and chili’s which were surprisingly unknown in Thailand prior to this.

Other common Thai ingredients introduced at this time include lychees, papaya, watermelon, pineapples and cashews.
Europeans also introduced the white potato, corn and wheat to Siam at this time.

Along with the new foods, Europeans also brought new cooking tools and methods of preparation. For example, the Portuguese and Indians introduced the addition of coconut milk to curries, which is now famous in Thailand and they also added tomato’s and eggplant.

Thai food is some of the most delicious and complex foods in the world.

Because of Thailand’s central location in Asia they were able to collect the best of the foods and cooking techniques of many lands and peoples. They then took these as there own and made them uniquely Thai, combining sweet, salty, sour and spicy in sometimes amazing combinations to make some of the best tasting food one can find.

So next time you eat a Thai dish remember that it took many hundreds of years and the contributions of many lands to make Thai food what it is today…absolutely delicious!